Matot opens with Moses’ instruction to the heads of the tribes regarding the laws of vows:

If a man vows a vow to G‑d, or swears an oath to bind his soul with a bond, he shall not break his word; according to all that proceeds out of his mouth shall he do.

A vow, however, can be annulled (as long as it does not involve an obligation towards another person). A father has the authority to annul the vows of his daughter, and a husband the vows of his wife or betrothed, within the day of the vow’s declaration. (Another kind of annulment is that effected by a Torah scholar or a panel of three judges.)

The War on Midian

G‑d instructs Moses to “avenge the vengeance of the children of Israel upon the Midianites, after which you shall be gathered to your people.”

Moses spoke to the people, saying: “Arm from yourselves men for an army, to go against Midian and to take G‑d’s vengeance on Midian . . .”

There were delivered out of the thousands of Israel a thousand of every tribe, twelve thousand armed for war.

Moses sent them to the war, a thousand of every tribe, them and Pinchas the son of Elazar the priest, to the war, with the holy instruments, and the trumpets to blow, in his hand.

They warred against Midian, as G‑d commanded Moses, and they slew all the males.

Also killed are the five kings of Midian (Evi, Rekem, Tzur, Hur and Reva) and the evil prophet Balaam. Not killed but captured were “all the women of Midian, and their little ones.” Also taken is “the spoil of all their cattle, and all their flocks, and all their goods.”

Moses, Elazar the priest, and all the princes of the congregation went out to meet them outside the camp.

And Moses was angry with the officers of the host . . . and said to them: “Have you saved all the women alive?

“Behold, these caused the children of Israel, through the counsel of Balaam, to betray G‑d in the matter of Pe’or, and there was a plague among the congregation of G‑d. Now therefore kill every male among the little ones, and kill every woman that has known man by lying with him. But all the women children, that have not known man by lying with him, keep alive for yourselves.”

Moses also tells them to undergo the seven-day purification process for one who comes in contact with the dead, while Elazar instructs them on the laws of hagalah (“koshering”—the cleansing of utensils of the non-kosher food absorbed in them), by which to cleanse the “gold, silver, copper, iron, tin and lead” utensils captured in the war:

All this was divided into two equal parts: half was given to the soldiers who fought in the war, who in turn gave 1/500 of their share as a “tax” to the high priest; the other half was divided among the people, who gave 1/50 of their share to the Levites. (Thus the high priest received 675 sheep, 72 cattle, 61 donkeys and 32 human captives; the Levites received 6,750 sheep, 720 cattle, 610 donkeys and 320 human captives.)

Everything else (i.e., utensils, jewelry and the like) was decreed to belong to the soldiers, to each what he had captured. However,

And they said to Moses: “Your servants have taken a count of the men of war who are under our charge, and not one man of us is missing.

“We have therefore brought an offering for G‑d, what every man has gotten, of jewels of gold, chains, and bracelets, rings, earrings, and girdles—to make atonement for our souls before G‑d.”

The donated gold totaled 16,750 shekels (approx. 837.5 pounds), which Moses placed in the Tent of Meeting as “a remembrance for the children of Israel before G‑d.”

As related in the Parshah of Chukat (Numbers 21), the people of Israel had conquered the lands of Sichon and Og, which lay east of the Jordan River.

[They] came to Moses, and to Elazar the priest, and to the princes of the congregation, and they said: “. . . Let this land be given to your servants for a possession; do not take us across the Jordan.”

Moses is extremely upset by their request. “Shall your brethren go to war,” he demands, “and you sit here?”

“And why,” continues Moses, “do you dishearten the children of Israel from going over into the land which G‑d has given them?

“Thus did your fathers, when I sent them from Kadesh Barnea to see the land.

“They went up to the wadi of Eshkol and saw the Land; and they disheartened the children of Israel, that they should not go into the land which G‑d had given them.

“G‑d’s anger burned at that time, and He swore, saying: ‘Surely none of the men that came up out of Egypt, from twenty years old and upward, shall see the land which I swore to Abraham, to Isaac and to Jacob. . . .’ G‑d’s anger burned against Israel, and He made them wander in the wilderness for forty years, until all the generation, that had done evil in the sight of G‑d, was consumed.

“And, behold, you are risen up in place of your fathers, a brood of sinful men, to augment yet the fierce anger of G‑d towards Israel. For if you turn away from after Him, He will yet again leave them in the wilderness; and you will destroy all this people!”

But the Reubenites and the Gadites persist. “We will build sheepfolds here for our cattle, and cities for our little ones.” But we have no intention to remain behind while the rest of the people fight for the conquest of the Land; indeed, we promise to march at the fore of the troops and fight in the front lines. “We will not return to our houses, until the children of Israel have inherited every man his inheritance.”

Moses agrees, on the condition that they fulfill their promise: “If you will do this thing, if you will go armed before G‑d to war . . . then afterwards you shall return, and be guiltless before G‑d and before Israel; and this land shall be your possession before G‑d.”

Half of the tribe of Manasseh joins the tribes of Reuben and Gad in settling the territories east of the Jordan.

The Torah goes on to recount the 42 stations from the Exodus from Egypt to the Promised Land:

1) “They journeyed from Rameses in the first month, on the fifteenth day of the first month; on the morrow after the Passover . . . and they camped in Sukkot”;

2) “They journeyed from Sukkot, and camped in Eitam, which is in the edge of the wilderness”;

3) “They journeyed from Eitam, and turned back to Pi-Hachirot, which is before Baal-Tzefon; and they camped before Migdol”;

4) “They passed through the midst of the sea into the desert, and went three days’ journey in the wilderness of Eitam, and camped in Marah”;

5) Elim (“in Elim were twelve fountains of water and seventy palm trees”);

11) The Sinai Desert (where they camped for eleven months and twenty days, received the Torah and built the Sanctuary); 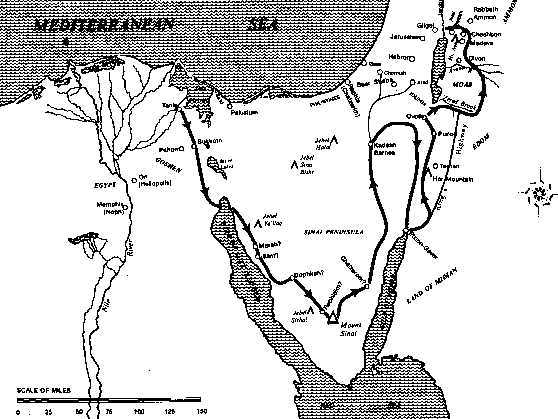 The Journeys of the Children of Israel from the Exodus to the Promised Land (from The Living Torah, published by Moznaim)

“Speak to the children of Israel,” says G‑d to Moses, “and say to them:”

You shall dispossess the inhabitants of the land, and dwell in it; for I have given you the land to possess it . . .

But if you will not drive out the inhabitants of the land from before you, then it shall come to pass that those whom you allow to remain of them shall be as thorns in your eyes, and stings in your sides, and shall harass you in the land wherein you dwell.

The Boundaries of the Land

This is the land that shall fall to you for an inheritance, the land of Canaan with its borders:

Your south border shall be the utmost coast of the Dead Sea eastward . . . to Maaleh Akrabbim . . . to Kadesh Barnea, and shall go on to Hazar Addar, and pass on to Atzmon; the border shall turn about from Atzmon to the wadi of Egypt, and its limits shall be at the Sea.

As for the western border, you shall have the Great Sea for a border; this shall be your west border.

This shall be your north border: from the Great Sea you shall mark out your frontier at Hor HaHar . . . to the entrance of Hamat . . . to Zedad . . . to Zifron, and its limits shall be at Hatzar Einan . . .

You shall point out your east border from Hatzar Einan to Shefam . . . to Rivlah . . . and shall reach the east coast of the Sea of Kinneret . . . down to the Jordan, and its limits shall be at the Dead Sea.

This shall be your land with its borders round about.

The tribe of Levi, who will not be allotted a portion of the land, should be given 48 cities in which to dwell.

Six cities—three on each side of the Jordan—should be set aside as havens for “one who slays a soul unawares.”

Anyone who causes the death of a fellow—intentionally or not—must find his way immediately to one of the cities of refuge, “so that the killer shall not die before he stands before the congregation in judgment.” Only there is he safe from the “redeemer of the blood”—the relative of the slain person who comes to avenge the death. For if the avenging relative kills the killer outside of a city of refuge, “he shall not be guilty of blood.”

The killer is then brought before the court. If he is convicted of intentional murder, he is executed. “The redeemer of the blood himself shall slay the murderer; where he meets him, he shall slay him.”

If he is found guilty only of causing a death through his negligence, but without intent to kill,

The congregation [of judges] shall save the slayer from the hand of the redeemer of the blood; and the congregation shall send him back to the city of his refuge . . . and he shall dwell in it until the death of the high priest, who was anointed with the holy oil.

Again, only there does the law protect him from the vengeance of the slain man’s relatives.

These laws shall be for a statute of judgment to you throughout your generations in all your dwellings:

Whoever kills any person, the murderer shall be put to death by the testimony of [two] witnesses; but one witness shall not testify against any person to cause him to die.

You shall take no ransom for the life of a murderer, who is guilty of death. . . . For blood pollutes the land; and the land cannot be cleansed of the blood that is shed therein, but by the blood of him that shed it.

You shall not defile the land which you shall inhabit, in which I dwell; for I, G‑d, dwell among the children of Israel.

The five daughters of Tzelafchad, whose father had died without sons, had petitioned for a share in the Land (as recounted above in the Parshah of Pinchas). Now, the leaders of their tribe, Manasseh, approached Moses with a petition of their own. If any of these women will marry someone from another tribe, they argued, this would mean that their sons, who will inherit their land, will likewise be of another tribe. The result would be that “their portion . . . shall be added to the inheritance of the tribe to which they are joined, and the lot of our inheritance will be diminished.”

The following law is therefore decreed by Moses, in the name of G‑d:

“These are the commandments and the judgments,” concludes the Parshah of Massei and the Book of Numbers, “which G‑d commanded by the hand of Moses to the children of Israel, in the plains of Moab by the Jordan near Jericho.”