At Mount Sinai the people of Israel experienced an all-consuming, if brief, revelation of G‑d. Now they are instructed to build a Mishkan, or “dwelling” (also called a Mikdash, “Sanctuary,” and commonly referred to as “the Tabernacle”), in which G‑d will “dwell within them” as a perpetual presence in the Israelite camp.

The people are told to make an “uplifting” (terumah) to G‑d, consisting of:

Oil for the light; spices for the anointing oil and for the sweet incense;

Shoham stones, and gemstones for setting in the ephod and in the breastplate.

Of these fifteen materials,

They shall make for Me a sanctuary, and I shall dwell within them.

The remainder of the Parshah of Terumah consists of G‑d’s detailed instructions to Moses on how to construct and assemble the various components of the Mishkan.

According to all that I show you, the form of the Tabernacle and the form of all its vessels—so shall you make it.

Before detailing the construction of the edifice itself, G‑d instructs Moses on the making of its “vessels”—the various furnishings that the Tabernacle housed.

The ark is to be constructed in the form of an open-topped box, 2.5 cubits (approximately 45 inches) long, 1.5 cubits wide and 1.5 cubits high. It should be made of shittim wood covered within and without with pure gold, with a gold “crown” around its rim. The function of the ark is to house the two tablets of testimony, engraved with the Ten Commandments, “which I shall give to you.” 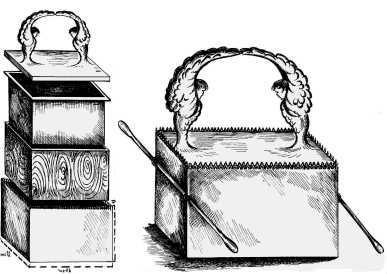 Two poles, also of gold-covered shittim wood, are to be inserted into four gold rings affixed to the four corners of the ark, with which the ark is to be carried from place to place.

The poles shall be in the rings of the ark; they shall not be removed.

You shall make two cherubim of gold . . . at the two ends of the cover.

The cherubim shall stretch out their wings on high, overspreading the cover with their wings, and their faces shall look one to another.

The kapporet with its two cherubim should be hammered out of a single block of pure gold.

“And there I will commune with you,” says G‑d to Moses;

I will speak with you from above the kapporet, from between the two cherubim which are upon the Ark of the Testimony, of all the things which I will give you in commandment to the children of Israel.

The Table and the Menorah

Make a table of shittim wood; two cubits shall be its length, a cubit its breadth, and a cubit and a half its height.

Like the ark, the table is to be overlaid with gold, given a gold crown along its rim, and have four gold rings affixed to its corners for its two carrying poles.

The function of the table is to hold the lechem hapanim (“showbread”), which were arranged on it in two tiers of six loaves each. The table’s accessories should include pans (for holding the specially shaped breads), vertical side-frames and horizontal supports on which these were arranged, and two small bowls for the levonah (incense) placed on the tabletop between the two tiers of showbread—all made of pure gold.

You shall make a menorah of pure gold. Of beaten work shall the menorah be made—its shaft, its branches, its goblets, its bulbs and its flowers shall be [hammered] of the same [piece of gold].

Together with the center shaft, this made seven branches, which are to be topped by seven lamps; “they shall light its lamps, that they may give light over its face.”

See that you make [the menorah and its parts] after their pattern, which is shown you on the mountain.

After describing the three major “vessels” of the Tabernacle—the ark, the table and the menorah—G‑d proceeds to detail the making of its roof coverings.

Three layers of coverings are to be draped over the walls of the Tabernacle, to form its roof and almost completely cover its sides. (The construction of the walls themselves are detailed in the next chapter.)

The first covering (which the verse calls, like the edifice itself, “the Mishkan”) should consist of ten tapestries, made of “fine-twined linen, and blue, purple and scarlet wool,” with “cherubim of artistic work” woven into the fabric.

The ten tapestries should each measure 28 × 4 cubits, and should be sewn together to make two large sheets of five tapestries each (making each "grouping" of five tapestries 28 × 20 cubits in size). The two “groupings” are then to be joined together by means of 50 gold clasps inserted into loops of blue-dyed wool sewn along the edges of the outermost tapestry in each “grouping.” Thus joined, the ten tapestries will form a sheet 40 cubits by 28 cubits (approximately 60 × 42 feet).

[Since the walls of the Tabernacle formed a structure 31 cubits long, 12 cubits wide and 10 cubits high, the first covering almost completely enveloped this structure, hanging down 8 cubits on each side and 9 cubits in the back. (The front end of the Tabernacle was covered by the separate “screen” described later.)]

The second covering (called ohel, or “tent”) should be made of goat hair. It should be larger than the first, consisting of 11 strips, each 30 cubits by 4 cubits, joined into two “groupings”—one of five strips sewn together, and a second of six. These in turn should be joined together with 50 copper clasps. (Altogether, the second covering will thus have an area of 44 cubits by 30 cubits.)

These two coverings are to be topped by a “roof” of red-dyed ram skins and tachash skins.

You shall make boards for the Tabernacle of shittim wood standing upright.

A defining feature of the Tabernacle is its portability: the “vessels” are equipped with carrying poles; the roof coverings are of cloth and animal skins. The walls of the Mishkan were likewise made to be dismantled, transported and reassembled numerous times, as the people of Israel set up camp in various locations in the course of their journey through the desert.

The boards should be made of shittim wood and covered with gold. Each board should be 10 cubits long, 1.5 cubits wide and 1 cubit thick.

The boards should be joined to each other by means of gold “rings” or brackets inserted into slits made in their top. Each wall should also be reinforced with four “crossbars” (two on top and two on bottom) inserted into rings affixed to the boards’ exterior. An additional “center bar” should run "through the middle of the boards, “from one end to the other.”

Stood upright and joined side by side, the 48 boards of the Tabernacle will form a U-shaped enclosure whose inside area is 30 cubits by 10 cubits. This area should be divided into two chambers: a 20 × 10 outer chamber to the east, and a 10 × 10 inner chamber (the “Holy of Holies”) to the west.

To separate the two chambers, a parochet (“veil” or “partition”) should be made of “blue, purple and scarlet wool, and fine-twined linen, with cherubim of artistic work” woven into the fabric. Four pillars of gold-covered shittim wood, inserted into four silver foundation sockets, should hold up the parochet. (Thus the Mishkan had a total of 100 silver foundation sockets.) The parochet should be hung exactly 20 cubits from the eastern end of the Mishkan, which will place it directly under the golden clasps which joined the two “groupings” of tapestries in the first roof-covering (as above).

The ark containing the tablets of testimony should be placed in the “Holy of Holies” behind the parochet. In the outer chamber, the menorah should be placed to the right (south) of the room, and the table to the left (north).

[The outer chamber also contained the golden altar, whose construction and function are described in next week’s Parshah.]

The front (east) end of the Mishkan has no boards, but should be covered with a “screen” (masach) held up by five pillars of gold-covered shittim wood inserted into five copper sockets. Like the parochet, the “screen” should be a tapestry of multicolored wool and fine-spun linen. It should be decorated with images of “embroidered work.”

Moses is commanded to construct the altar—a hollow, earth-filled structure made of copper-plated shittim wood—to be placed outside the Mishkan, in front of the “screen” on its eastern side; on this “outer altar,” selected parts of the offerings brought to the Sanctuary are burnt.

You shall make its pans to receive its ashes, its shovels, its basins, its forks and its firepans: all its vessels you shall make of copper.

Both the Mishkan and the altar should stand within an enclosure or “courtyard” (chatzer).

The enclosure should measure 100 cubits from east to west and 50 cubits north to south. Its walls should consist of linen hangings held up by pillars of shittim wood with silver hooks and silver trimmings, inserted in copper sockets. A total of sixty pillars should be made, including four pillars to support a 20-cubit screen that should stand before the entranceway in the center of the eastern side of the enclosure.

All the utensils of the Tabernacle, in all its service, all its pegs, and all the pegs of the enclosure shall be of copper.